About » In the Student Spotlight

In the Student Spotlight 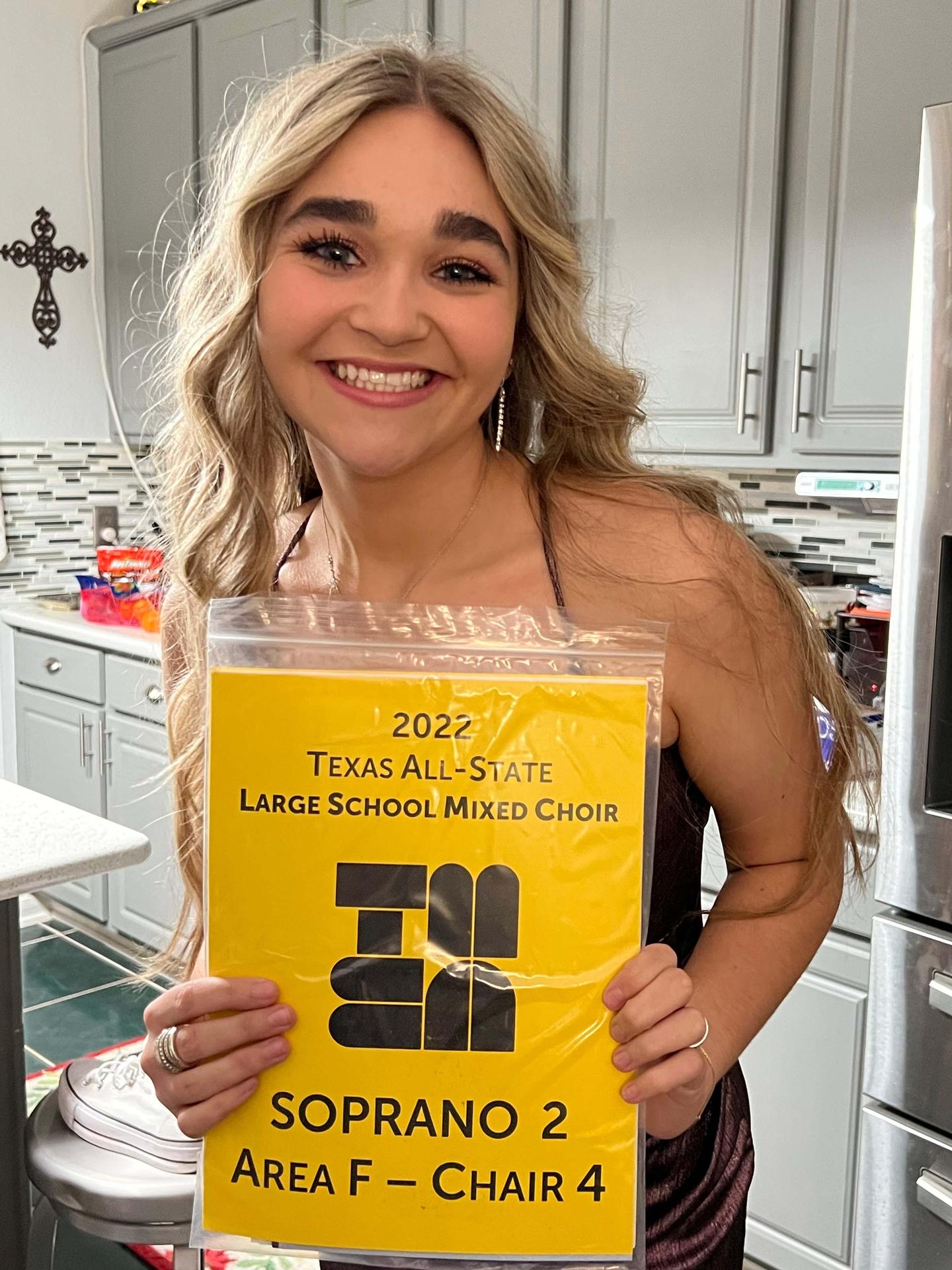 Congratulations to Brooklyn Freeman for earning a spot in the TMEA All-State Choir! A junior at Northland Christian, Brooklyn entered the All-State audition process for public schools, competing against students from 5A and 6A high schools in Texas. The audition process began with thousands of students across Texas and Brooklyn placed fourth over all! She will represent Northland as a member of the Texas All-State Choir.

PAST STUDENTS IN THE SPOTLIGHT 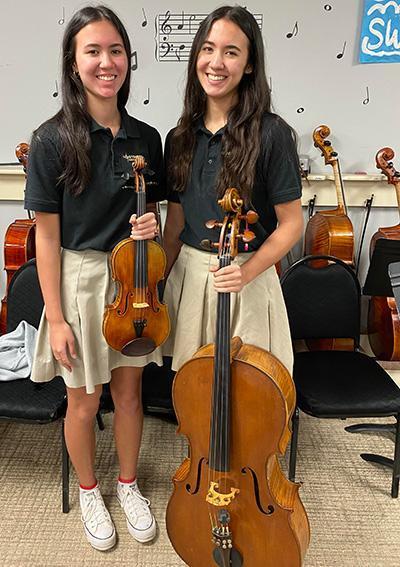 This past weekend marked the culmination of 5 months of hard work, preparation, and endless hours practicing in the TMEA (Texas Music Educators Association) All State process. In February 2022, Northland will be represented in the TMEA orchestras by Julia Hearn and Madeleine Hearn.
According to TMEA, each fall over 70,000 high school students across the state audition in their TMEA Region. Individuals perform selected music for a panel of judges who rank each instrument or voice part. A select group of musicians advances to compete against musicians from other Regions in their TMEA Area. The highest-ranking musicians judged at the TMEA Area competitions qualify to perform in one of 18 Texas All-State ensembles sponsored by the Band, Orchestra, and Vocal Divisions.
On the Region level, Julia Hearn and Madeleine Hearn, violin and cello, respectively, each earned 1st chair in the Region 33 orchestra. They submitted recordings for Pre Area and they both advanced to the final round. Notably, Madeleine earned 1st chair in our Zone, which includes students from the entire Houston Area.
After the final Area audition, Julia earned placement in the Sinfonietta Orchestra, and Madeleine earned placement in the Symphony Orchestra, ranking 5th in the state.
They will attend the TMEA Convention in San Antonio in February.
Congratulations Julia and Madeleine! 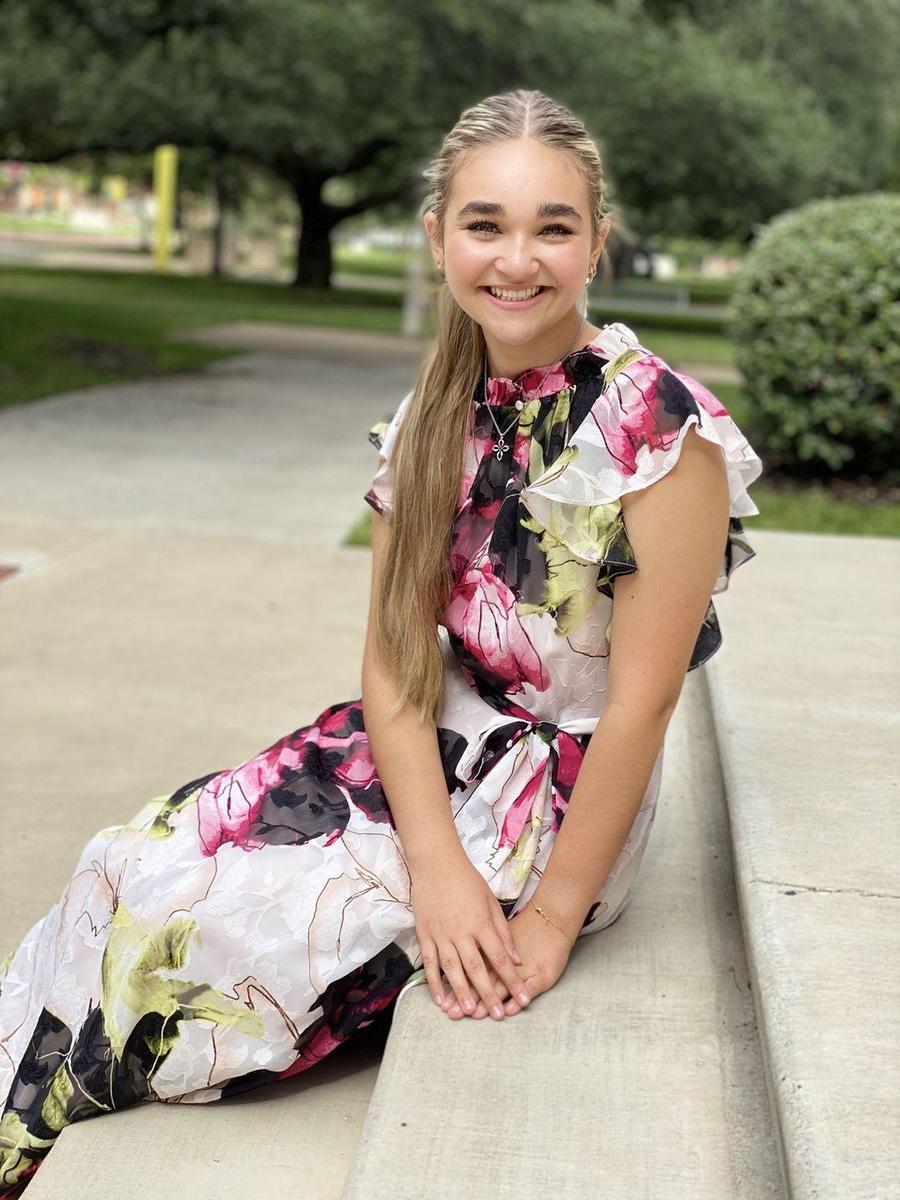 Brooklyn Freeman, a junior at Northland, decided to audition for the Texas Music Educators Association (TMEA) All-State Choir instead of the smaller all-state choir for just private school students. In order to do this, she is competing against high school students from the biggest school districts around. Her first round of auditions, District, had her competing against students from public schools in the Spring, Spring Branch, Humble and Aldine Independent School Districts. She placed first in that round and moved on to Region, again facing students from public schools in our area including Porter, New Caney, and Galena Park in addition to Spring, Spring Branch, Humble and Aldine ISDs. After competing against these 5A and 6A public high schools she again placed first!
Brooklyn will move onto the next round of auditions, Pre-Area, on December 2 where she will face even more students from public high schools across Texas.
According to TMEA, of the more than 70,000 Texas high school students who compete in All-State each fall, only 1,800 are chosen to be a part of one of their ensembles.
Congratulations to Brooklyn for making it to the next round of auditions! We are so proud of you for your hard work and for representing Northland so well in this competition.

March, 2021
Congratulations to Northland's inaugural Academic Decathlon for placing 5th at the Frisco State competition after competing with public and private schools from across the state. The 2020-21 NCS Academic Decathlon team includes Riley Frank, Brooklyn Freeman, Danielle Rangel, Angela Vu, Ian Wietstruck, and Charles Xie.
These students immersed themselves in a deep study of this year's National Academic Decathlon theme, The Cold War. Their study and competition included ten subjects: math, science, social science, art, music, language and literature, economics, speech, interview, and essay. We are so proud of the talent and perseverance of our NCS Academic Decathletes! We are looking forward to next year's national theme: WATER: A Most Essential Resource.
Students should contact the Academic Decathlon coach, Mrs. Freeman, for information about joining. 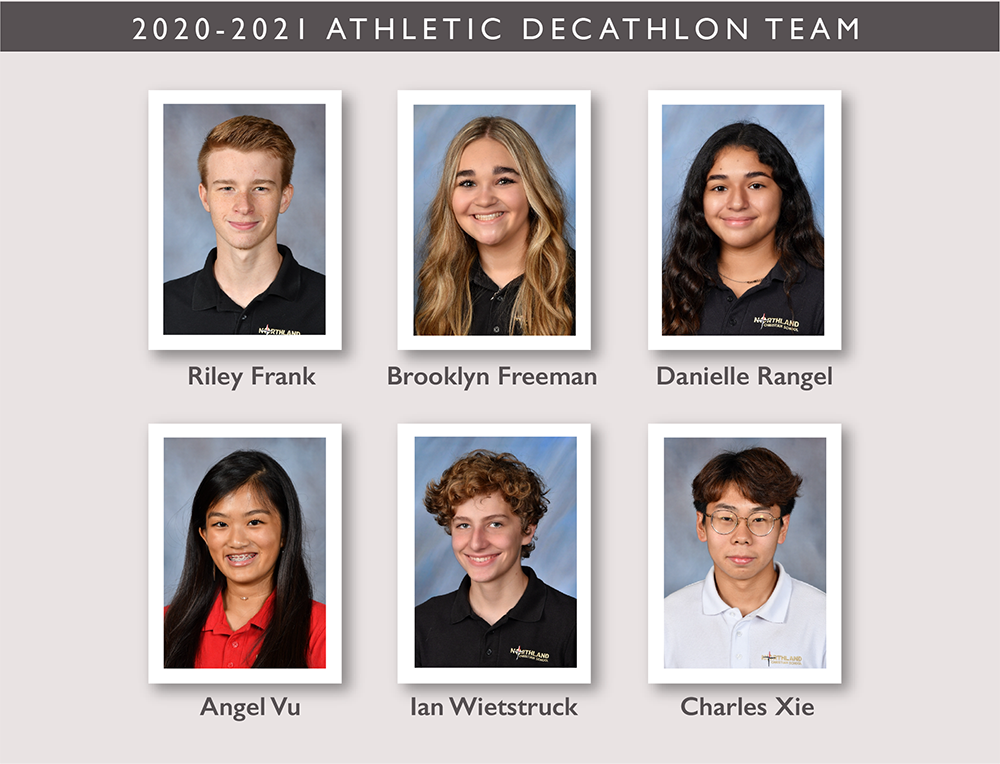 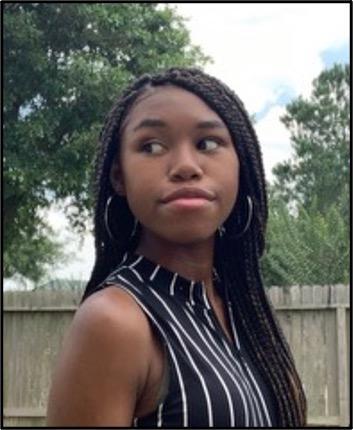 Congratulations to 11th grader, Trinity Polk, for her outstanding accomplishment of winning THREE Gold Keys - the highest possible region award - in the Scholastic Writing Competition. In 2020, Trinity won three Silver Keys in the Scholastic Writing Competition and was named a winner in the Enrichment & Brotherhood Organization of Northwest Youth’s Short Story Contest.
More about Trinity’s writing!
“I became interested in creative writing when I started watching a lot of movies at a young age. My imagination ran wild and I had so many ideas for books and even movies that I began to write. My favorite subgenre for creative writing is either fantasy or science fiction because ideas for those just come easy to me. I've always enjoyed reading or watching anything fantasy because the amount of creativity it takes for writers and directors is just inspiring. I've always struggled to decide what to write because I either have either no ideas or too many ideas. But my best ones come to me out of the blue or when I've been inspired by a show/movie.”

Brooklyn Freeman, a member of the Northland Christian School Choir, will perform with the Texas All-State Choir.
Brooklyn was chosen for this prestigious honor through a competitive process held this year across the state at Region, Pre-Area, and Area levels, earning first chair at the Region level, second chair at Pre-area and Area. Only the top 2.6% of musicians who initially audition become All-State musicians.
Brooklyn is a voice student of Judy Boyter. As a sophomore, this will be Brooklyn’s second time to perform as a member of a TMEA All-State organization. Brooklyn loves to sing and has worked hard to persevere during the pandemic. She joined the Houston Girls Chamber Choir during the fall semester of 2020 and participated in the Texoma NATS Classical Competition placing first for the second time. 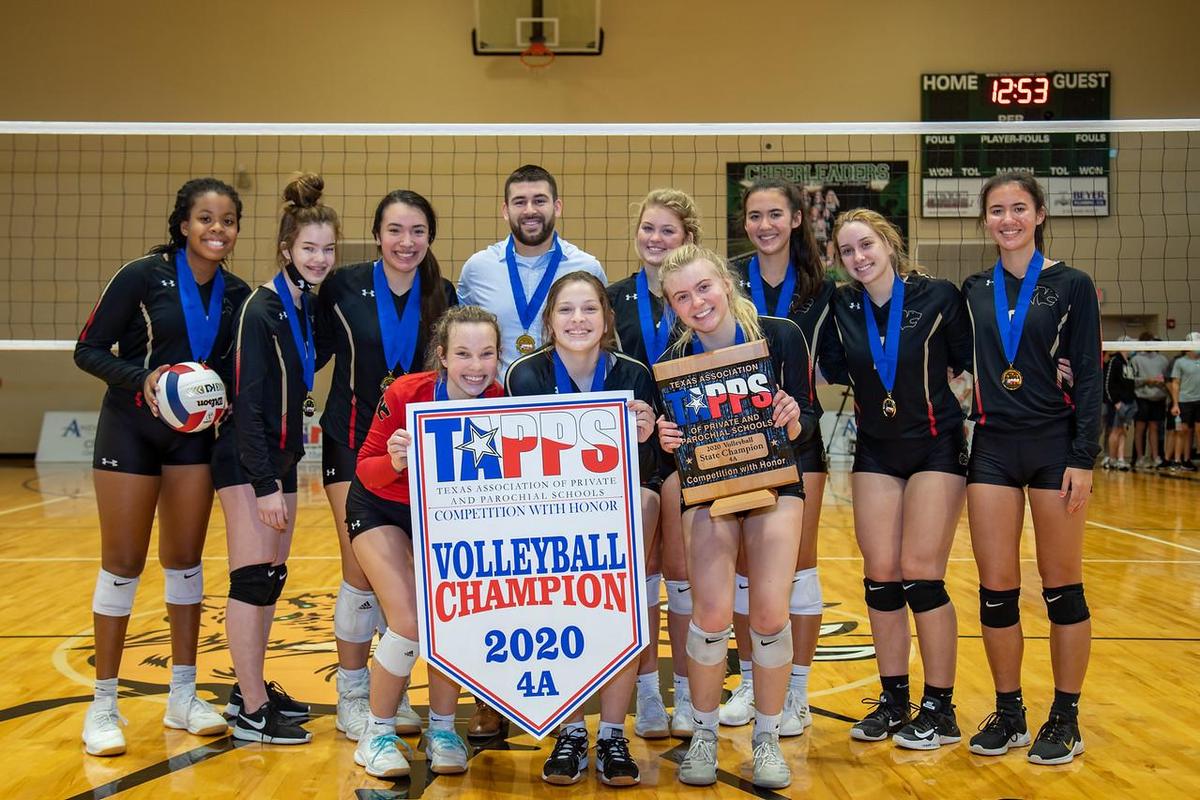 The Northland Christian Volleyball Team had a season to remember. Only two years removed from a state finals appearance in 2018, and after only graduating two Seniors in 2019, the team appeared to be ready for another deep playoff run. The ladies continued to perform admirably, despite the mounting pressure and stress created by global pandemic.

After an undefeated district campaign, and their first district championship since 2002, San Antonio Lutheran came to Northland for the Area Championship. The Lady Cougars handled Lutheran 3-0, and traveled to La Grange for a neutral site match up against San Antonio Holy Cross. After losing the first set to Holy Cross, the team found their focus and execution, winning the next three sets, and advancing to the State Final Four for the second time in two years.

Their semifinal matchup was against a familiar foe. Faith West Academy has been Northland's toughest district rival the last two years, and this would be their third matchup this season. Though Faith West Academy played an inspired match, the Lady Cougars would advance after winning a decisive fifth set.

The Lady Cougars went to the huddle a little stunned, but the resolve of Coach Gonzales and the leadership provided by Seniors Aimee Arash-Ajayi, Nicole Berkeland, and Emma Nelson had the team refocused for the fourth set.

Lake Country would take an early lead in the fourth set, but Freshman Kinsey Kraner and Sophomore Christina Vigil had key serves that swung the fourth set for the Lady Cougars, and secured the team their first ever State Championship.

This special group of young people, led by their passionate coach, inspired their school and community amidst the backdrop of a world battling COVID-19. 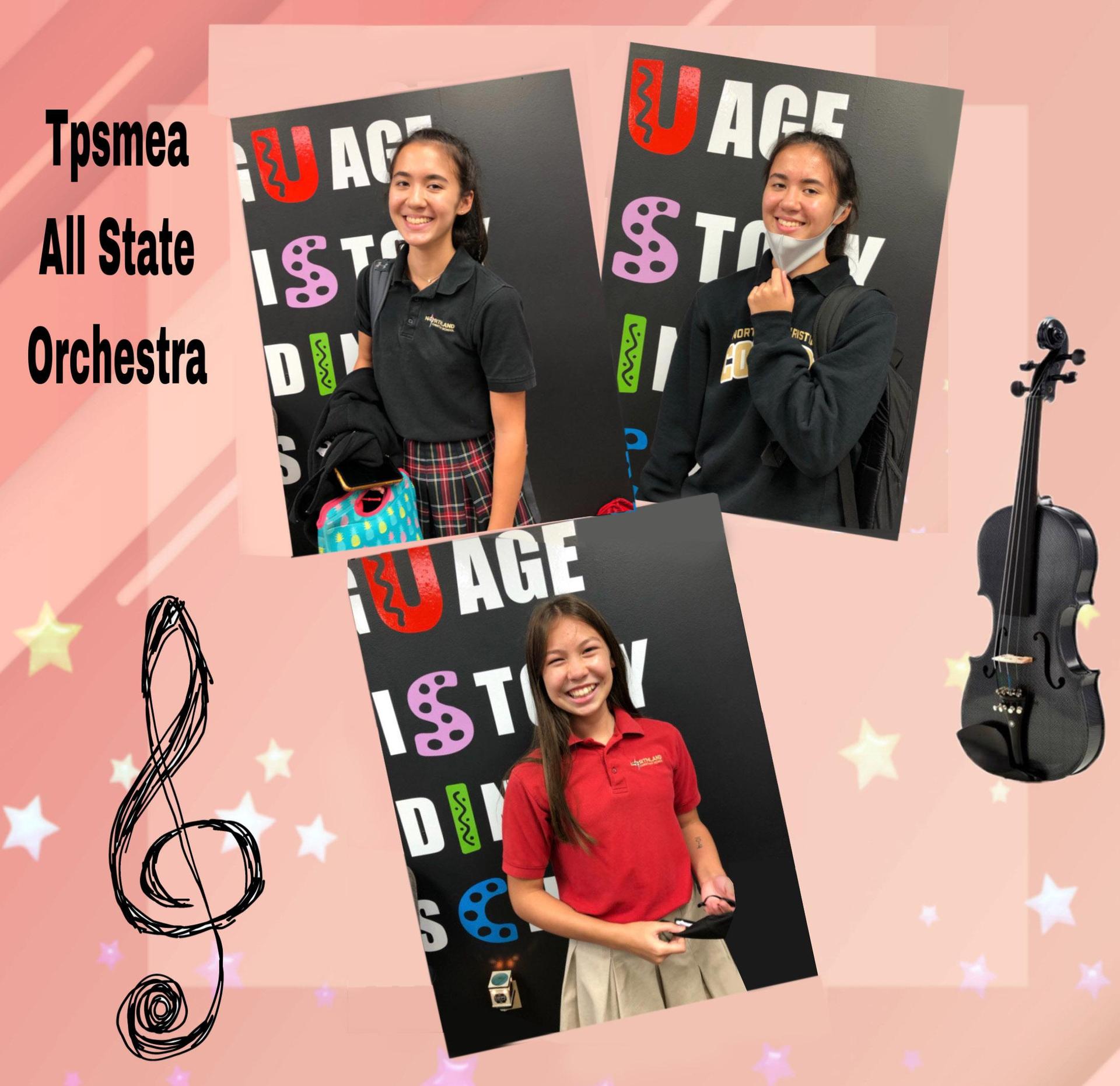 Congratulations to 8th grader Samantha Hearn and sophomores Julia Hearn and Madeleine Hearn for earning a spot in TPSMEA All State Orchestra.
Under the direction of Northland Orchestra teacher Kelly Hearn, they auditioned along with over 100+ other students from Texas Private Schools. Julia and Samantha placed in the top 12 in the violin and viola sections, respectively, and Madeleine was in the top 5 in the cello section. Due to current conditions, there will not be an in-person All State clinic and concert this year, but they will still be on the course to be 5 year All Staters, and hopefully next year, we will be back to live performances.
Congratulations to the Hearn family!

October, 2020
This is the first year for most of our Northland students to participate in TMEA (Texas Music Educators Association). We had 14 students earn a spot after auditioning virtually against more than 400 students in Region 33 public schools. Although there will not be a clinic/concert this year, placing in the HS Symphony Orchestra will allow these students to audition for TMEA All State Orchestra. Students will also have the opportunity to audition for TPSMEA (private school) later this year. Their talent and hard work are to be commended. Congratulations to all!! 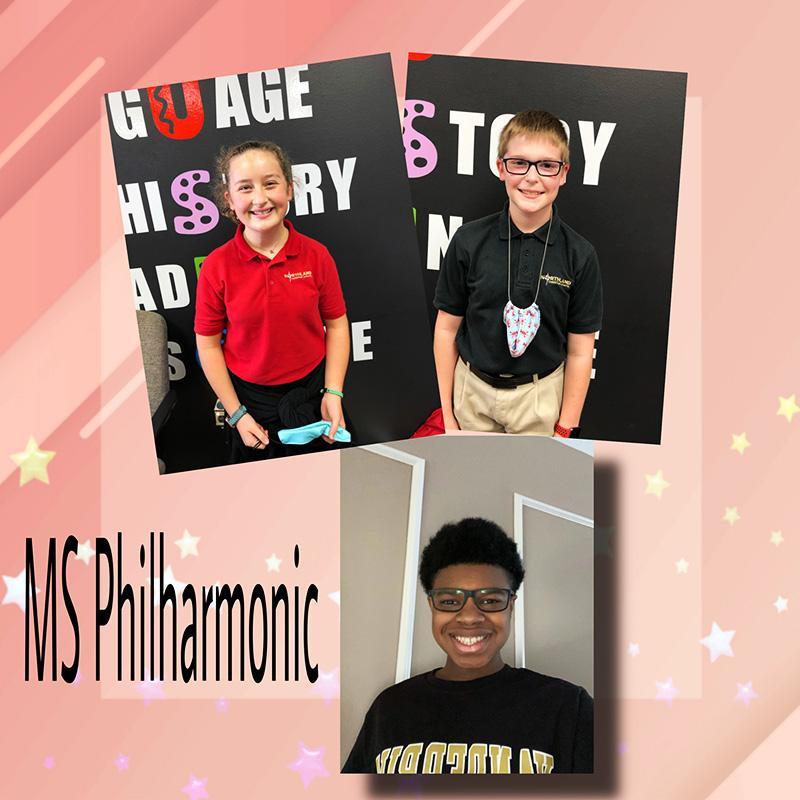 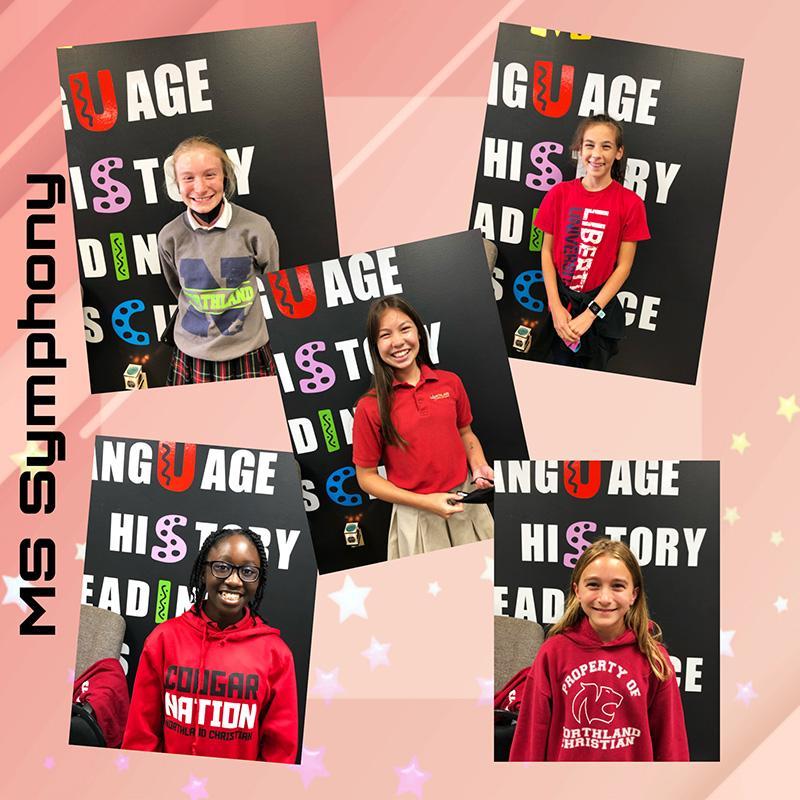 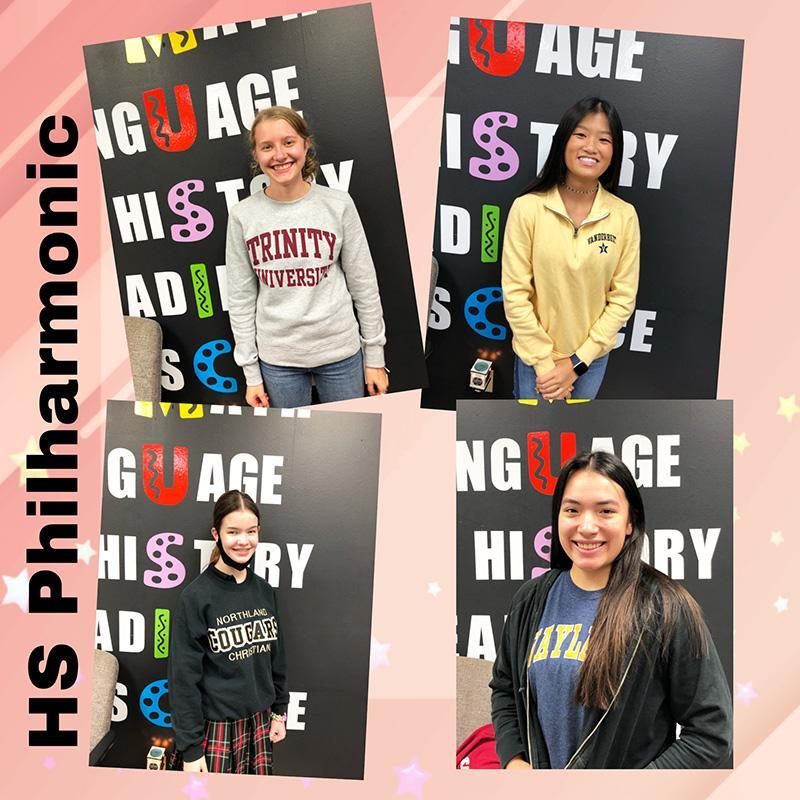 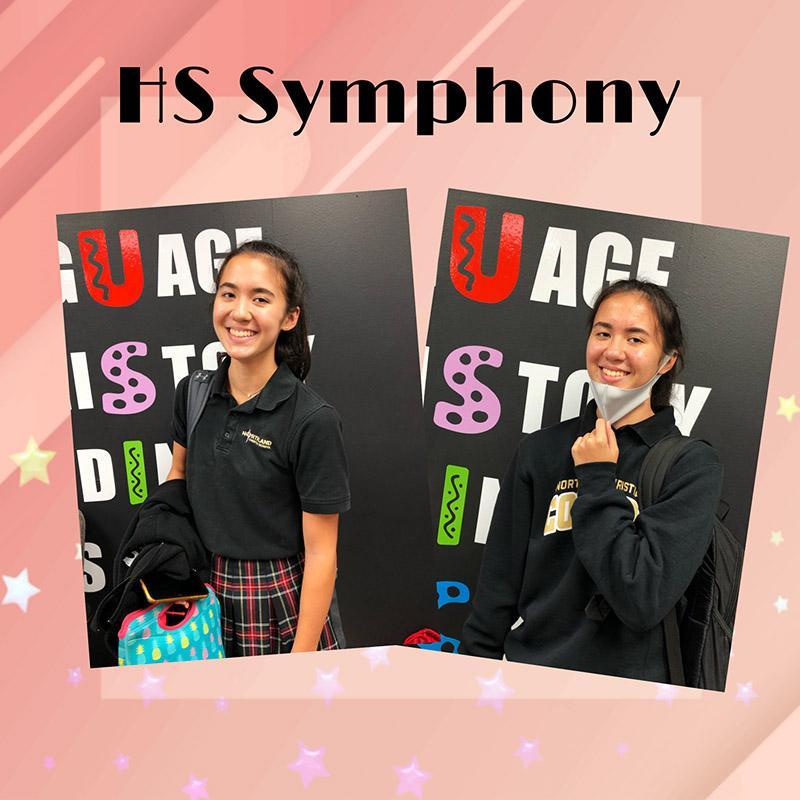 Pictured above: Madeleine Hearn** and Julia Hearn*
* Placed in the Top 10, ** Placed 1st in section 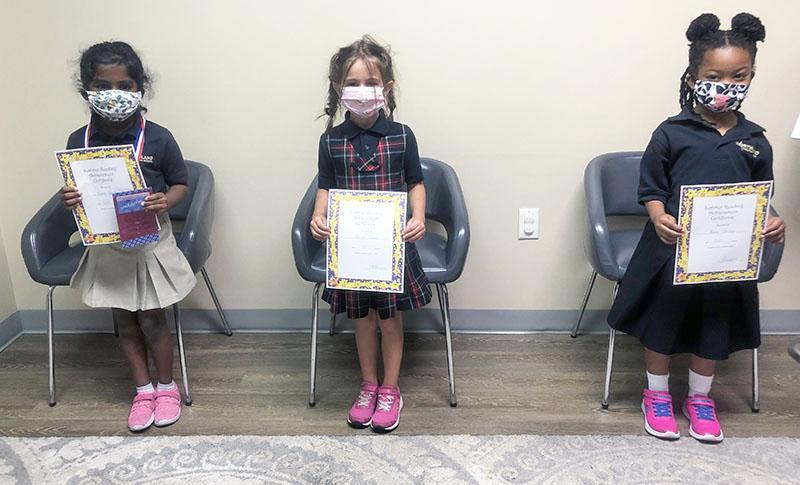 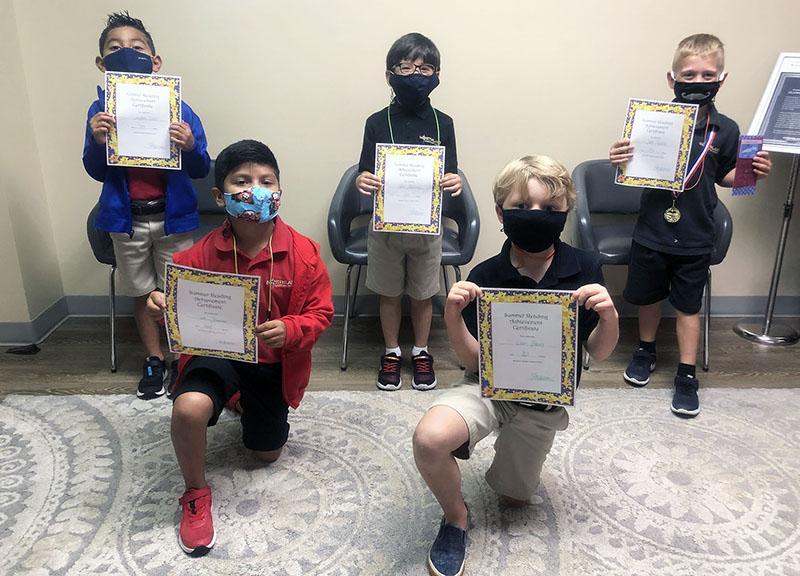 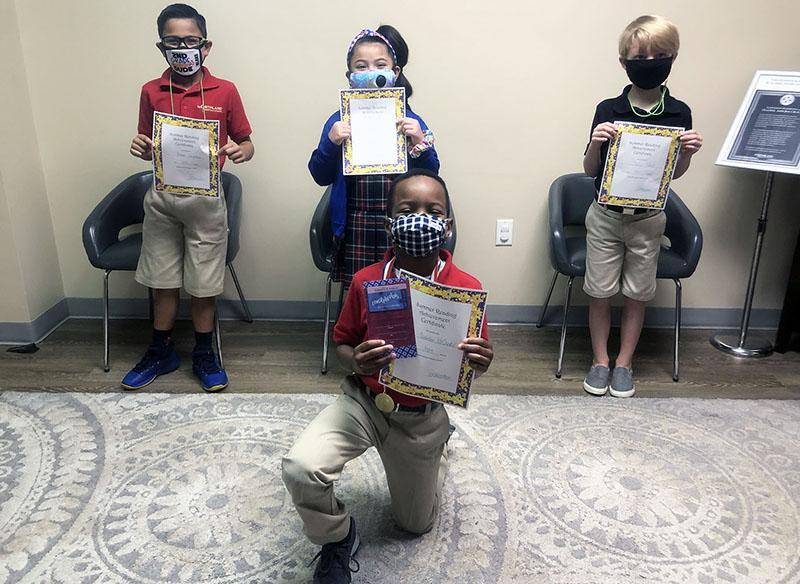 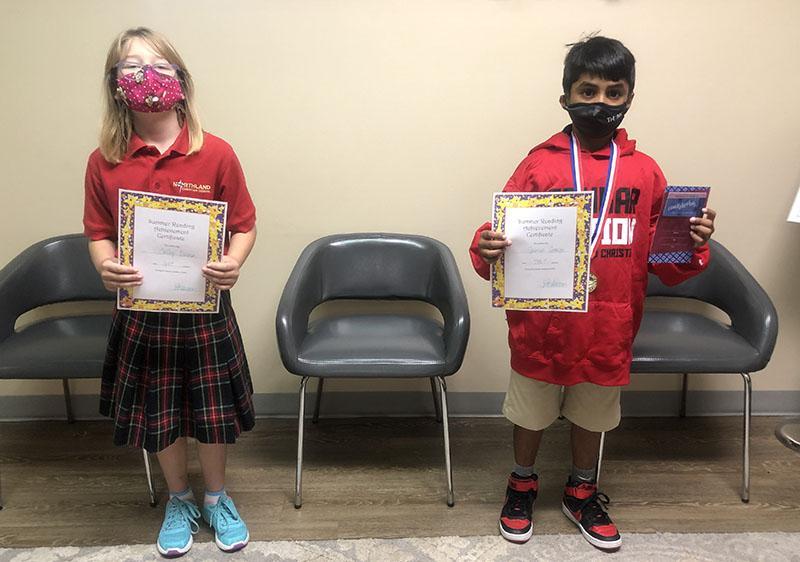 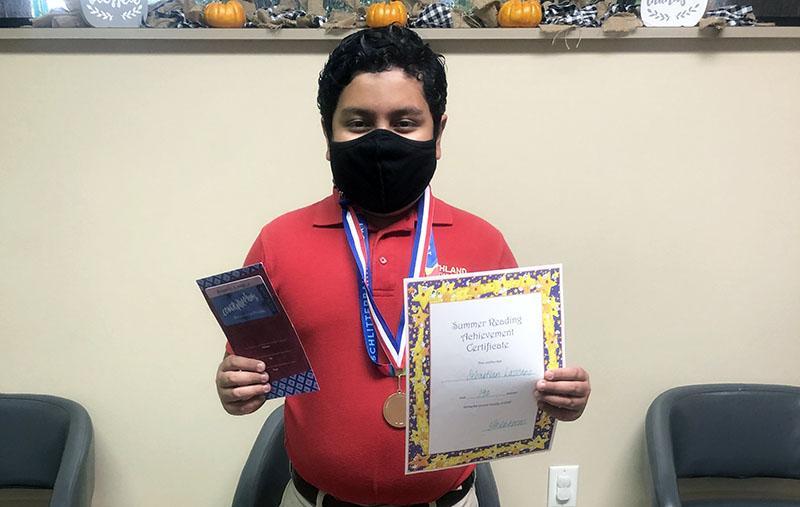 August, 2020
Northland eighth grader Reagan Wilson is featured in the July/August issue of the Christian magazine For Girls Like You. Congratulations, Reagan! 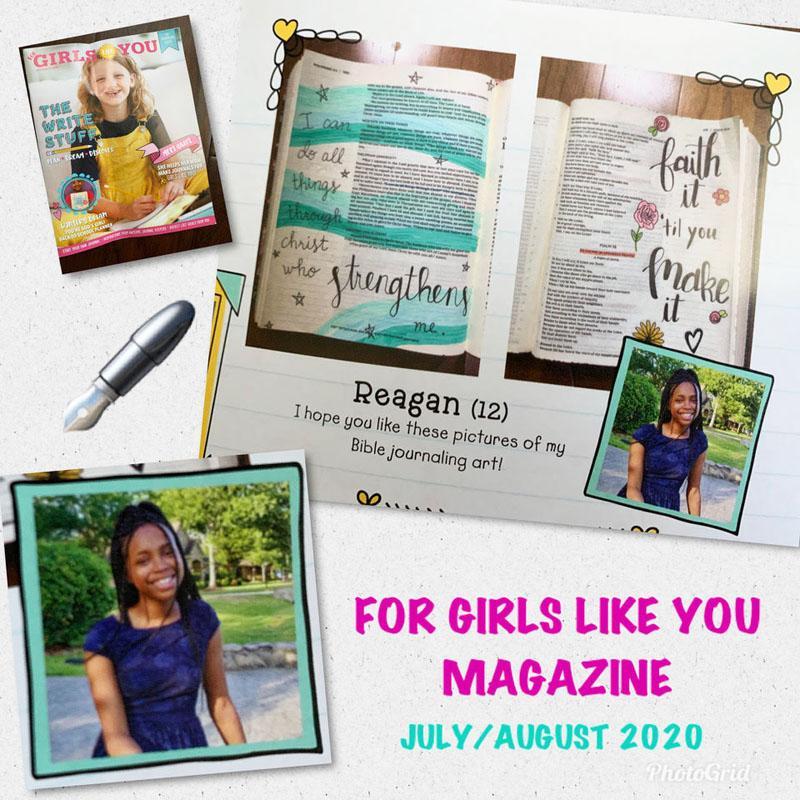